You are here: Home / Uncategorized / A Fine Tradition

And one that is unfortunately on the point of dying out – I think we are possibly the last people in our street to have our milk delivered by the Milkman to our doorstep early in the morning.

The full cream is great on cereals, muesli, porridge etc and in REAL coffee, the semi-skimmed in tea and the orange is the best type.  OK it may be slightly more expensive but at least it’s really fresh, you don’t have to lug it home from the supermarket in plastic containers that end up in landfill.  The bottles are taken away, cleaned and bought back full.  It used to be delivered in one of these… 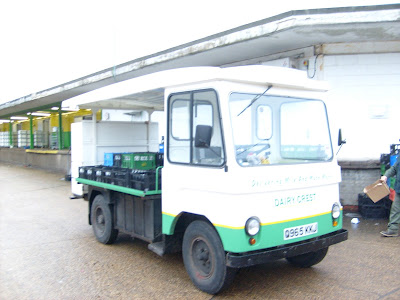 …a non polluting, electric powered milk ‘float’ by Fred the friendly, whistling neighbourhood milkman.  Unfortunately he retired and it now comes on a Transit.

Any other blog readers still have their milk delivered??

Remember – Use it or loose it.  It’s a bit like the traditional crafts or buying wine that has a real cork in it (although that’s getting harder and harder).

Apropos of this I was once told a lovely story by Trevor Austen the Kentish Rakemaker who sadly passed away on Christmas Day after 5-6 years suffering from motor neurone disease.

In the 1960’s he found he couldn’t really earn enough money from making wooden rakes to support him and his family so he took on a milk round in the morning and made rakes in the afternoon.  His round took in Chilham Castle in Kent and one day in the 80’s he turned up there to deliver the milk to find that they were filming Rod Hull’s Christmas Special.  The director spotted him and thought it would be a great idea to have Rod and Emu arriving at the castle in Trevor’s milk float.  He got permission from his boss and went back later in the day to film it.  Well, Rod and Emu jump off the milk float, say goodbye and thanks to Trevor and Rod grabs a pint off the back.  Trevor said quite indignantly “They never paid me for that pint either!”

See Stuart King’s film of Trevor making a rake here.
And on the Museum of English Rural Life website his brother, David, demonstrating on Trevor’s behalf – note the milkman’s overall which they always used to wear in the workshop.