We were demonstrating at a show near St Albans on Saturday at the Woodland Trust’s HeARTwood Summer Festival.  A young furniture maker (power tools) called Ben asked if I ever used Hornbeam.  “Only when it’s really freshly felled,” I replied, “or you find out why it’s called Hornbeam!”  Apparently he’d been dropped off some logs by a local tree surgeon, didn’t count on using them and offered them to me.  About an hour later he came back with the largest log which I could see straight away was actually Hawthorn.  Great, even better, I love it for turning and spoon carving – a very dense, hard and pinkish wood.

This is typical of the hit-and-miss way I source my timber – someone else also gave me a nice Hawthorn log only the other week (he also gave me a lovely piece of Apple and a Laburnum log – thanks Mark).  So now everything will be made of that for a while as it was from Catalpa earlier in the summer.  I’ve had a load of Sweet Chestnut for the courses this year but now I’m bored of that and fed up with cleaning the purple gunk off the tools.  I found a nice Ash log stuffed under a hedge in the Abbey Gardens last week but I would be happy if I could find a more regular, reliable supply.

I notice that in Mike Abbott’s latest book ‘Going with the Grain’ he notes two suppliers of chairmaking Ash but only in Herefordshire and Gloucestershire.  Wouldn’t it be good if there was a nationwide directory of people who are willing to sell logs of different species of timber to green woodworkers?  I’m willing to compile such an index and would be grateful for the names of any woodland owners, tree surgeons, wildlife organisations etc that I could add.

On a different note this Elder tree doesn’t seem to know whether it’s coming or going at the moment, bearing both ripe fruit and fresh blossom at the same time…? 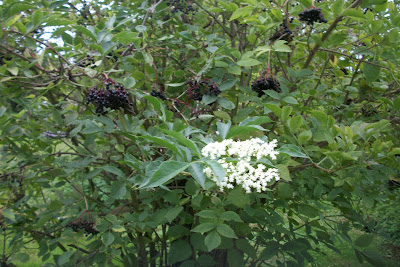