You are here: Home / Uncategorized / News 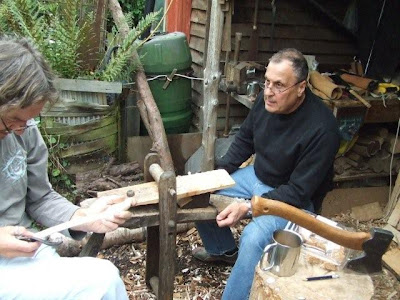 Just inspecting a spoon made by Chris who came for a days introduction last week.  His wife Pat gave him the day as a birthday present and kept it a secret.  She drove him over and he really had no idea what he had come here to do – a real magical, mystery day…I told him we were going to do flower arranging!  He was quite good with his hands and made a rounders bat from Ash and an Alder spoon.  (She took this photo and sent it to me.  The camera still hasn’t been fixed and I’m kind of missing it now.)

The Monty Don effect has really kicked in this month – I’ve got 8 course days.  Really short-sighted of the BBC not to recommision Mastercrafts because I’ve talked to loads of people who saw it – it really touched a nerve.
Can we think of 6 more crafts that would be suitable and interesting?  I’ll start the ball rolling with…Ceramics. 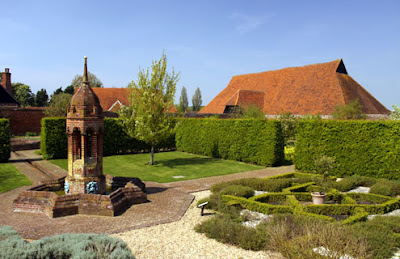 The European Woodworking Show at Cressing Temple Barns was a gas.  The Barns themselves are definitely star of the show but despite the damp weather and the fact that dogs weren’t allowed we had a good time, specially on Saturday.  We met loads of people we knew and managed to put quite a few names to faces and faces to names!
We stayed with Vanessa’s sister Jackie, her husband Tim and niece Natalie in Chelmsford and they looked after Jed while we were at the show.  I think he might have got a bit spoilt with jaffa cakes and lying on the sofa etc…

Check out Barn the Spooncarvers new blog on the Links list.