I wrote about the Catalpa tree outside Rochester Cathedral in previous posts.  Here’s an update.

Around 20 years ago the powers that be decided that the huge, old tree was going to die and so planted a replacement.  Recently it was noted that the tree was actually in fine fettle and that the replacement was the wrong variety of Bean Tree anyway.  So it was cut down and Fern saved me the logs. 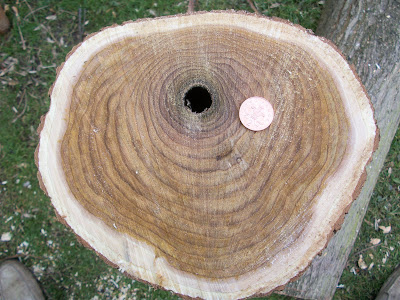 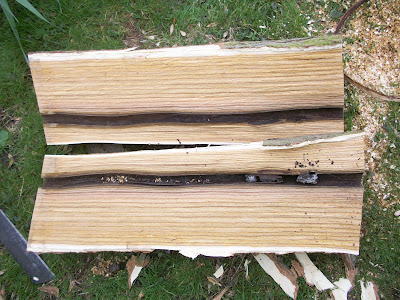 There’s a huge pith cavity, or is it a pillar of rot? (2p piece for scale) and the wood looks a bit like Ash with pink, yellow and green tinges.  Unlike Ash it’s fairly soft and easily workable even when seasoned.  Freshly split there’s a lovely smell of spice and tobacco.
Last Saturday I demonstrated at the Rochester Cherry Festival in The Vines.  I made spoons and spatulas from Cherry to fit in with the theme but took along the Catalpa Collection to try and sell in aid of the Old Tree. (Possibly the only tree in the world with it’s own website – I’d be interested to hear of others)

Sue Haydock who initially launched the Appeal was delighted to buy the bowl I’d carved for quite a lot of money! 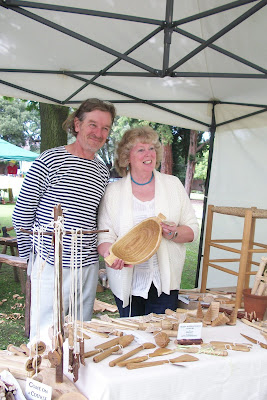 maybe I’ll make some more bowls from it…  (mmm – pity I never took a proper photo of that one but I didn’t expect to sell it so quickly).