You are here: Home / Uncategorized / STORM DORIS BLOWS OUT THE COBWEBS AT THE CROWS NEST

So I knew she was coming, I checked all the bungees and tension wires, studding greased, made sure everything was well tied down/up, doors and gates locked tight, beehives protected and hoped frt the best… 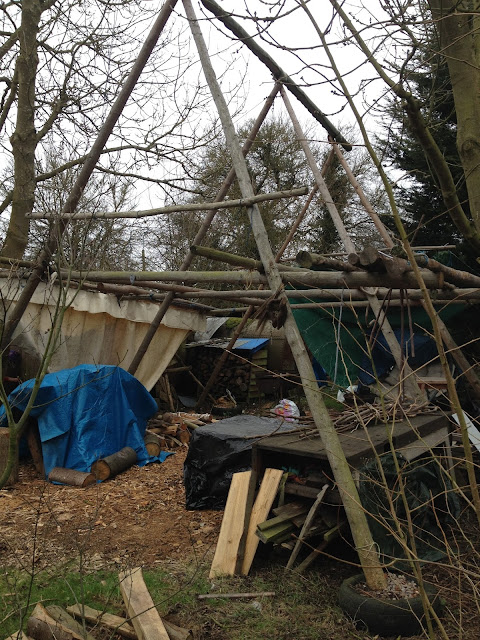 Everything looked shipshape on opening the gate, the cedar I planted some 10 years ago gently bending and all looked well.  Until I drove around the corner and then I spotted a new sculpture, mossy looking with some interesting ribbons and streamers dancing in the breeze – interesting didn’t really remember that being around – peculiar.  On closer inspection it was an interesting pile of pallets I’d had stacked up about 30yards away waiting to be used as a new log shelter.  Something else that’s been on a back burner, whilst I’ve been procrastinating as to whether I really needed to bother with, as the incredibly dense conifer which I’ve hacked into with the chainsaw is doing a really good job of impersonating a weather proof cave.

Then having checked on the girls, who really hadn’t even noticed the wind and seemed really buzzy on a pollen gathering mission at the pussy willow, I took a look at the Woodland Workshop.  At first it didn’t look as if anything untoward had happened – just the roof adrift.  Closer inspection revealed that Doris had picked it up and moved it about six foot.  Not really that bad but now it’s balanced on two legs instead of six and has the gait of an inebriated gentlemanly structure staggering home after a hectic night out. 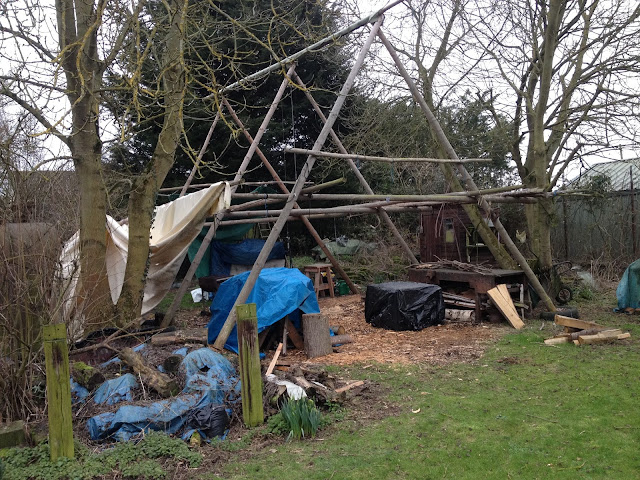 Linseed oil is a wonderful thing and at the end of last season I discovered a gallon in one of the sheds which had all sorts of stickers on it making it quite clear that it MUST NOT BE SHAKEN.  These were by my dad who died a few years ago and must have been stuck on it more than 50 years back.  So each pole lathe, shavehorse, chopping block, cleaving break, bowlhorse and the work bench all got a liberal coating before the storm. 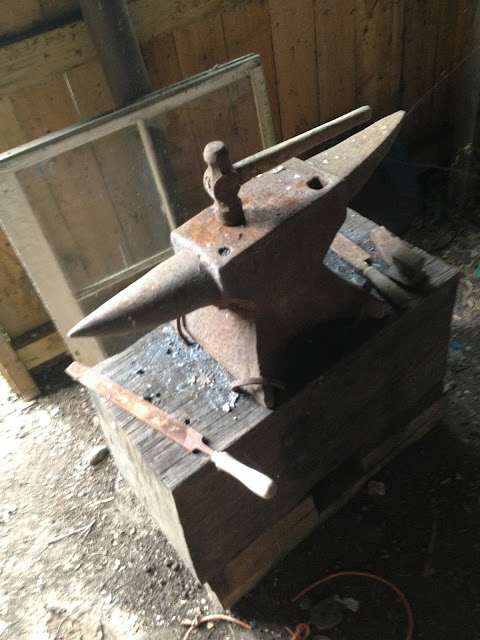 So a quick shifty round in the forge was needed to accommodate most of the kit – I will admit I did struggle with that anvil and called it a few unmentionable names until it agreed to co-operate!  Moving all the shavehorses and chopping blocks was a doddle in comparison as they all came apart with ease (Linseed oil – great stuff).  Had to have a bloomin’ great tidy up though – the previous incumbent had left a right old mess and just filled it up with all the crap he couldn’t find house space for including his collection of fizzy drink tins & sweet wrappers.  Then I just lit the forge and made tea. 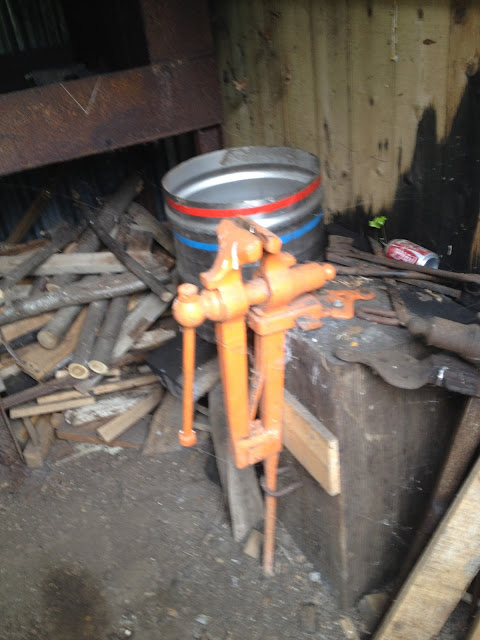 That cuppa and walking round cogitating made me think long and hard about that workshop.  We put it up in just a couple of days, bish bash bosh, and I was so thrilled with it.  We’ve had so many fantastic courses and workshops, parties and camping sessions that I felt a bit emotional and then I had that Eureka moment.

I never really considered the spot it’s in – flippin’ wind tunnel with a howling gale rushing straight through that will shiver your timbers and give you Midsummer Nightmares.  So I decided I was going to burn it!  Then I decided I wouldn’t.  Then I decided I’d take it apart and then burn it!  Then I decided against that too.  Then I decided I’d take it apart and re-build it… Ahhh got there in the end!  So at the moment I’m taking stock and am going to completely reposition it on the other side of the field where it’s much more sheltered with a different vista and a more interesting approach.  In fact Storm Doris you’ve done me a favour – I’ll reclaim my Woodland Workshop and rejuvenate the whole area.  I think it will extend the season and time I spend there purely because it’s more sheltered and in a more elevated position and I shall re-capture that thrill of being at one with nature in my own Woodland… bit.ly/2deES7q