You are here: Home / Uncategorized / We’ve been Screwed… 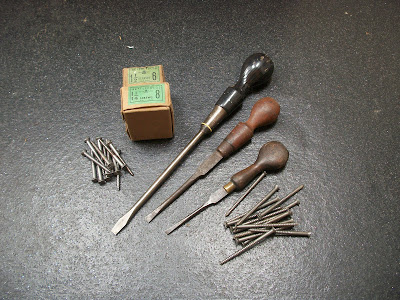 In building my new workshop lately I’ve been doing a fair amount of ‘brown’ woodwork involving chop saws, nail guns etc. These tools have now become industry standard and a carpenter can’t compete unless they have th

em.
On it’s second or third outing my new Makita drill/driver packed up so, having loads of screwdrivers, I decided to do it by hand and go and seek some 2 and 3 inch slotted steel screws. What a joke.  Everything is now crosshead – one guy actually laughed at me and called me a Dinosaur…
Eventually I phoned the local builder’s merchant in the town and he said he thought he had some ‘out the back somewhere’ but nobody had asked for them for 10 years.
Screwdrivers are now officially obsolete – a thing of the past.